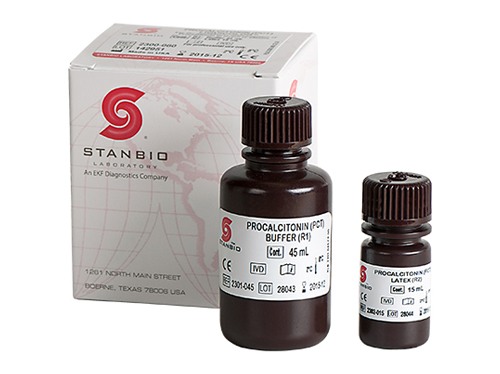 EKF Diagnostics, the global in vitro diagnostics company, announces that its Stanbio Chemistry Procalcitonin (PCT) LiquiColor® assay has been FDA cleared and validated for use on Beckman AU 480, 680 and 5800 clinical chemistry analyzers.  EKF is pleased to confirm the immediate availability of a user defined application (UDA) for running this 10 minute test for bacterial infection and sepsis on these Beckman AU analyzers.

PCT is a widely accepted marker for use in conjunction with other tests to quickly identify sepsis and monitor progression/severity over time. EKF’s PCT test is designed to be used on an open channel of most main brand clinical chemistry analyzers, including Roche Cobas, Abbott Architect and Hitachi systems. Therefore, the availability of the User Defined Application (UDA) on Beckman AU analyzers further increases the breadth of application of the LiquiColor PCT assay.

Trevor McCarthy, Sales Manager, EKF Central Laboratory Products, EMEA/APAC said, “The news regarding the FDA clearance and Beckman AU analyzer validated application for the PCT LiquiColor assay will bolster trust in the quality and reliability of our product.  Having EKF’s PCT assay validated on Beckman AU chemistry analyzers allows us to provide a competitive alternative product for hospital labs and should open up new markets and opportunities for us to support improved and early detection of sepsis.”

The cost-effective, immunoturbidimetric assay, which features the use of monoclonal antibodies coated to latex particles, can determine PCT from just 20µL of serum and plasma specimens. Conveniently, the reagent set requires no reagent preparation and is designed to be used on open chemistry systems. It is available in a liquid-stable format, meaning that it can remain on-board a clinical chemistry analyzer for up to four weeks.

PCT is a quick and effective adjunct marker in sepsis diagnosis which helps to differentiate between viral and bacterial infections, so enabling early administration of antimicrobial therapy. It is an important test, as the Surviving Sepsis Campaign (SSC) estimates that the incidence of sepsis is 3 per 1,000 worldwide. There has been a steady rise in the number of patients with sepsis; globally there are now over 18 million cases per year. Due to its high mortality, sepsis is a primary cause of death with it accounting for over 60% of deaths per year in the developing world. It kills over 6 million new-borns and children each year and there are over 100,000 cases of maternal sepsis.

In addition to improving sepsis survival rates and improving antibiotic stewardship, studies have also shown that PCT testing reduces hospital costs and length of stay. For example, a recent large cohort study examined whether PCT testing helps to more effectively manage sepsis care. The study found that use of PCT testing on day one of admission into the ICU lead to an average of 1.2 fewer hospital days than patients who were not screened and saved an average of $2,759 on their total hospital costs.1