The global prevalence of diabetes

The global prevalence of diabetes

Diabetes, a disease affecting blood glucose control, is a growing issue worldwide. From 1980 to 2014, the number of people affected by diabetes almost quadrupled from 108 million to 422 million worldwide, or a growth in diabetes prevalence of 4.7% to 8.5%.1

This growth trend is not estimated to stop or slow in the future, according to the IDF Diabetes Atlas, by 2040 the number of worldwide diabetics are expected to grow to 642 million, representing a potential future healthcare crisis for patients and providers alike.2

The healthcare costs are also expected to balloon. In the years between 2007 and 2012, the total healthcare costs associated with diabetes rose from $174 billion to $245 billion, or 41% in just a 5-year period.3

The majority of diabetes cases occur in developing countries, representing a high proportion of the disease’s economic burden. Prevalence of diabetes in Asian countries is particularly high and expected to increase.4

In fact, 60% of the world’s diabetic population are concentrated in Asian countries, with socio-economic growth, industrialization, and urbanization being three of the most common factors associated with increased prevalence of the disease.4

Diabetes is also growing in potentially epidemic proportions in India where over 62 million people are affected.5,6 Genetic factors, improved living standards, and rising levels of obesity are some of the many reasons associated diabetes is growing in this geographic region.7

What are the health effects of Diabetes?

The short- and long-term health effects associated with diabetes are many, and each of these health effects worsen with poor glycemic control. Managing diabetes appropriately with prescribed therapies, diet, and lifestyle changes are crucial for reducing the progression of associated symptoms.

People with diabetes can take measures to reduce their blood sugar and prevent the progression of short- and long-term health effects. Exercise is one method for improving cells’ sensitivity to insulin in type 2 diabetes and enhances a well-rounded treatment protocol consisting of a healthy diet and pharmacological (insulin therapy) support.11

Regular analytic measurements with a glucose analyzer can help monitor effect of therapy, assessing the most appropriate strategy depending upon a patient’s individual needs. 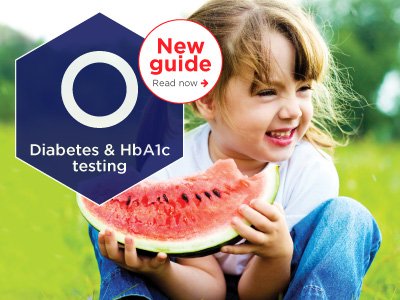 One key method of reducing diabetes incidence globally is with early detection and preventative measures, especially at the prediabetes stage of the disorder.

Point-of-Care-Testing (POCT) devices for diabetes have quickly become one of the most important tools for detecting diabetes. These devices can analyze blood glucose levels, lactate, and even glycated hemoglobin (HbA1c), a marker for diabetes as well as a prognostic risk marker for heart disease.

In addition to glucose and HbA1c analyzers, Glycated Serum Protein (GSP) assays, like the GSP LiquiColor® Assay offered by EKF Diagnostics, can help detect markers for diabetes. This GSP assay provides a description of average blood glucose over a 2-3 week period.

In patients deemed ineligible for HbA1c testing, like pregnant women and patients with pancreatic disease, a GSP assay can be an accurate form of measurement and prediction of diabetes status.