EKF Diagnostics, the global in vitro diagnostics company, announces that it is expanding the distribution of its Procalcitonin LiquiColor® Test into Eastern Europe, Middle East and APAC regions. Procalcitonin (PCT) is a marker for bacterial infection and sepsis, a condition that has grown in awareness in recent years. PCT is now widely recognized as an important adjunct marker in sepsis diagnosis which aids in the differentiation between viral and bacterial infections. 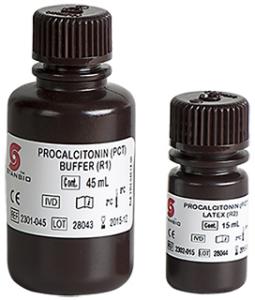 Sepsis can quickly develop into severe sepsis and septic shock - conditions associated with signs of end-stage organ damage and hypotension. At this stage, risk of death is high and increases drastically the longer the initiation of treatment is delayed. However, if a patient receives antimicrobial therapy within the first hour of diagnosis, their chances of survival are close to 80%. This short window is therefore often referred to as ’the golden hour.’

EKF’s Stanbio Chemistry PCT assay can be used in conjunction with other tests, to rapidly assess initial severity of sepsis within the golden hour.  As it provides quantitative results within ten minutes, it helps physicians to monitor treatment and track improvements over time. The test is CE marked and will shortly receive FDA approval.  It is an open-channel immunoturbidimetric assay that can run with multiple sample types, providing a cost effective solution for many hospital laboratories.

“We have started to see significant interest in Asia Pacific for PCT.  Here we are working closely with three major distributors covering the Philippines, Indonesia and Vietnam to introduce PCT into hospitals,” said Trevor McCarthy, EKF’s Sales Manager. “As awareness about the severity of sepsis and the importance of early detection grows, we anticipate more and more interest globally in this product. FDA approval will help us build our brand, both in the Asian market and further afield.”

EKF Diagnostics’ Stanbio Chemistry portfolio is a broad range of liquid-stable reagents, calibrators, standards and controls. LiquiColor® and Liqui-UV® reagents are designed for maximum stability, ease-of-use and are optimized for today’s chemistry analyzers.  In addition to its PCT test for sepsis, EKF continues to build on its successful range of esoteric reagents, which also includes Glycated Serum Protein (GSP) and Beta-Hydroxybutyrate (B-HB) LiquiColor assays for diabetes care.