Lactate accumulation in muscle cells and blood is a normal consequence of exercise in horses. At low exercise intensity, the aerobic metabolism of glycogen, glucose and fat provides energy in the form of ATP to fuel muscle activity. As exercise intensity increases, oxygen levels can no longer meet the ATP requirement and rather than pyruvate being used in the citric acid cycle in the mitochondria, it is metabolised to lactate to fuel muscle energy requirements.  Because lactate cannot be used as an energy source in muscle, lactate is sequestered into the blood for transport to the liver where it is used as an energy source or converted to pyruvate. Blood lactate levels during exercise are therefore an indicator of anaerobic metabolism and provide an indicator of muscle exertion. It is the onset of the “switch” from aerobic to anaerobic metabolism and the ability to maintain steady state lactate levels at any given exercise intensity that is of interest in conditioning athletes, be they human or equine.

In order to determine optimum training regimes and fitness gains, set exercise tests (SETs) or step tests are used.  Typically, a SET consists of a baseline lactate reading (t = 0) and several lactate measurements over 10 – 40 minutes of either steady state exercise (eg treadmill running at a specific velocity) or increasing exercise intensity (eg treadmill running with increased velocity at set time points) followed by a recovery period.  The same SET is then performed after a period of training and the plots of the lactate levels are compared.  (See figure 1)

Resting blood lactate concentration in the horse is approximately 1–1.5 mmol/L. At low speeds this value does not change greatly from the resting value. At moderate speeds lactate begins to accumulate in the blood with accumulation accelerating when exercise/speed increases above the level at which blood lactate is about 4 mmol/L. This threshold workload at which blood lactate is maintained at 4 mmol/L is often referred to as the anaerobic threshold, or the speed at onset of accumulation of blood lactate (OBLA) and also as VLa4. VLa4 is therefore the work velocity/intensity which results in a blood lactate of approximately 4 mmol/L. This value is derived from inspection of graphs of exercise speed (on the X axis) plotted against blood lactate concentration (on the Y axis) (See figure 1). At speeds greater than VLa4, lactate accumulates rapidly in the blood. The general relationship between velocity and blood lactate is therefore usually described as exponential. However, if sufficient steps are used in the exercise test, the relationship is described by two straight lines, with an obvious velocity at which the blood lactate begins to accumulate in blood. 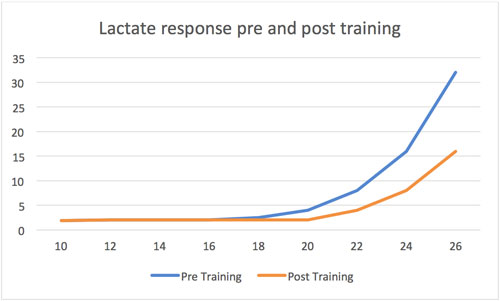 Figure 1: Plot of exercise speed (x axis, in km/h) against blood lactate concentration(y axis, in mmol/L) for determination of OBLA.

Many studies of horses trained on both treadmills and on racetracks consistently demonstrate that training results in lower blood lactate concentrations at the same work speed. The speed at which blood lactate begins to accumulate rapidly, VLa4, also increases ie the horse is able to work at a higher speed/intensity without accumulating lactate. Repeated tests of the blood lactate relationship with velocity are suitable as a means of measuring increasing stamina with training. VLa4 measurements every 2–3 weeks also enable measurement of changes in fitness through the training program.

EKF has described how to take capillary sample in humans, and the same basic principles apply except that lancets should be larger (21G, 7mm) and the fur will need to be shaved at the sample site.  As described by Kobayashi (2007), the capillary puncture site should be the central region of the left neck. Shave an area approximately 1cm2 and disinfect with 50% ethanol in water to wash off dirt before exercise.  Post exercise, remove sweat using distilled water and puncture the shaved site with a 21G 7mm long lancet. Wipe away the initial drop of blood and use the second drop to take the lactate sample.

Why should veterinary professional use PoC analyzers?

Find out more about the different methods for testing, the symptoms and the associated conditions, and understand how POCT can help vets provide a specialised service to their clients.

Learn more about the benefits