Recently, in studies conducted at the Joslin Diabetes Center, elevated circulating sTNFR1 levels were strongly associated with the subsequent development of advanced Diabetic Kidney Disease (DKD) in Type I and Type 2 diabetic patients.

These findings have been further validated in two additional cohorts by EKF Diagnostics.

The resultant colour intensity is proportional to the concentration of sTNFR1 in the test sample.

The assay is calibrated against a highly-purified E. coli-expressed recombinant human sTNFR1 protein corresponding to the N-terminal ectodomain. The calibration curve range is 7.8 500 pg/mL; this corresponds to serum / plasma sTNFR1 concentrations of 78 ­ 5000 pg/mL for samples assayed at 10-fold dilution. The assay range can be increased by increasing sample dilution.

Find out more about sTNFR and kidney disease

Diagnosis of Diabetic Kidney Disease (DKD) is conventionally achieved by assessment of overall renal function (glomerular filtration rate, GFR) and the presence of kidney damage ascertained by either kidney biopsy or other markers of kidney damage such as microalbuminuria or proteinuria (collectively referred to as albuminuria).

GFR is estimated in clinical practice using readily calculated equations that adjust serum creatinine values to age, sex, and ethnicity. It is important to recognize that while both serum creatinine and albuminuria can be easily assessed using readily available, inexpensive laboratory testing, these tests have shortcomings, being late biomarkers and having a low predictive value.

Studies showing that sTNFR1 identifies diabetic patients at the highest risk of progression to ESRD were conducted at the Joslin Diabetes Center involving type 1 and type 2 diabetic cohorts, sTNFR1 was found to be a major determinant of time to CKD Stage 3 and time to ESRD over a follow up period of 12 years: 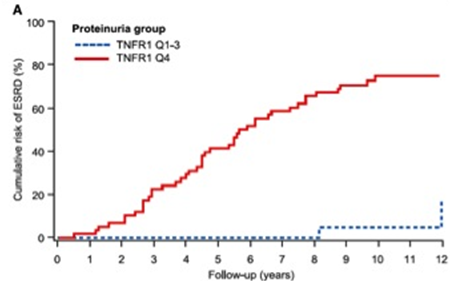 Example 1. Cumulative risk of ESRD in patients with T2D during 12 years of follow-up according to quartiles of plasma TNFR1 at baseline examination and proteinuria status. 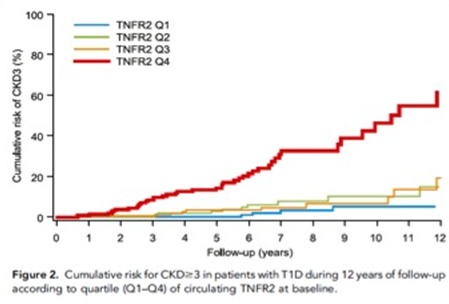 Example 2. Cumulative risk for CKD> Stage 3 in patients with T1D during 12 years of follow-up according to quartiles of plasma TNFR2 at baseline examination.

Chronic kidney disease (CKD) is a key determinant of poor health. CKD is associated with an eight to tenfold increase in cardiovascular mortality and is a risk multiplier in patients with diabetes and hypertension. Early detection and treatment of CKD using readily available, inexpensive therapies can slow or prevent progression to end-stage renal disease (ESRD). Diabetic Kidney Disease (DKD) or Diabetic Nephropathy is the leading cause of ESRD.

Treatments for CKD can reduce the risk of progression to ESRD.  These treatments are based on the control of established modifiable risk factors. Control of hypertension is the single most effective intervention. ACE inhibitors (angiotensin-converting-enzyme inhibitors) are recommended for most diabetics with high blood pressure and kidney disease. Studies have consistently shown that the lower the blood pressure, the slower the progression of CKD.

Novel therapies and approaches for management of Chronic Kidney Disease are in development with many undergoing advanced clinical trials including, medical devices, pharmaceutical and cell or gene therapies.

Kidney Failure,  or ESRD, results in dialysis or transplantation which, in addition to the obvious impact on the patient, have a significant societal impact.

The most obvious societal effect of CKD is the enormous financial cost and loss of productivity associated with advanced kidney disease. For example, many developed nations spend more than 2 - 3% of their annual health-care budget on treatment for ESRD.

In 2011, the FDA chose to promote innovation in ESRD due to its great public health impact highlighting that more than half a million Americans suffer from it. Most dialysis patients spend long hours in specialized outpatient clinics, lowering quality of life and reducing their productivity. In addition, Medicare covers some 75 % of ESRD healthcare costs which, in 2009, topped $29 billion.